As the US Presidential Election campaign continues to gain momentum, this is a particularly pertinent study from the team at Pew Research.

According to Pew’s latest study of more than 12,600 US adults, more than a quarter now get at least some news content from YouTube. 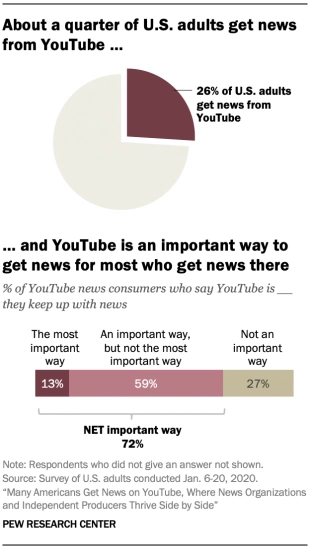 As you can see in this chart, while few people use YouTube as their primary source of news content, the majority of respondents do see it as an important means to stay informed. Which means that there are a lot of people now turning to YouTube for official updates – and given that the platform hosts not only mainstream, but also left of center views, that could be contributing to the rise in conspiracy theories and counter-narratives, which are fueling, at times, dangerous movements within the US.

Pew’s extended shows that the 377 most popular YouTube news channels “are largely a mix of established news organizations (49%) and independent channels (42%), with the rest associated with other types of organizations (9%)”.

Indeed, Pew says that total consumption of news content from established and independent channels is almost in equal balance, while Pew also notes that independent news channels on the platform are far more likely to cover conspiracy theories – like, for example, QAnon. 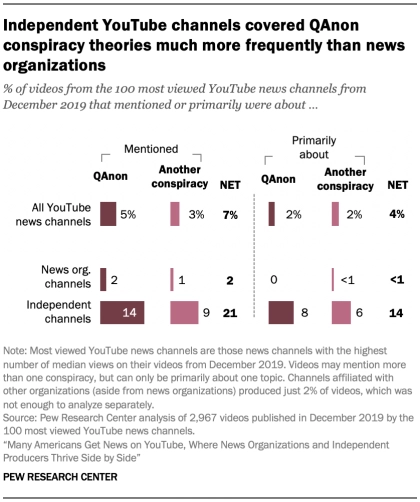 QAnon, as you may recall, has been banned on both Twitter and Facebook due to concerns that it’s fueling violent actions among members, and inciting further division in the US.

And this is just one example, previous reports have also highlighted YouTube as a key facilitator of anti-vax content, COVID-19 conspiracy theories, 9/11 truther videos, flat-earth explainers and more.

To be fair, YouTube is working to limit the reach of such content where possible, but with over 300 hours of video being uploaded to the platform every minute, it’s impossible for YouTube to stop all of these types of clips being shared, and potentially distributed to the platform’s billions of users.

Even worse, in 2020, YouTube is actually becoming an even more critical source of news and information. Recently, YouTube reported that watch time on home TV screens jumped 80% year over year during the COVID-19 lockdowns, while the closure of more and more local news outlets as a result of the pandemic is pushing more people to seek alternate forms of news and updates, likely driving them towards Facebook and YouTube for such.

That will mean that even more people are getting critical news updates from the video giant, and as you can see in these stats, that could have significant impacts with respect to fueling unproven theories and movements.

So what can be done about it?

As with Facebook, this is a key question for the future of news consumption and ensuring informed debate. Both platforms serve billions of people, and both have the potential to undermine official information, and amplify concerning, divisive movements which could have major impacts on society as a whole. It still seems far-fecthed, in many ways, to suggest that YouTube and Facebook could lead to real-world protests and conflicts, but the evidence shows that this is indeed already happening, and the potential for even greater division remains significant.

The benefit of social media platforms is that they give everybody a voice, a means to be heard, and to share their lived experiences with the wider world. The flipside of that is that it also enables those with fringe beliefs to amplify their messaging, and with social platform algorithms favoring content that inspires debate and discussion, as a means to maximize time spent in their apps, that establishes a dangerous incentive matrix for those with extreme views.

If you want maximum attention on social media, you need to take a side. And the more discussion your posts generate, the more reach you’ll get.

This latest data underlines a critical concern with that process, and with modern information distribution in general.