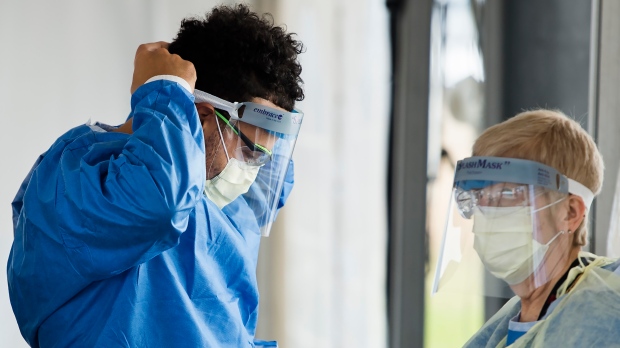 TORONTO — As COVID-19 cases continue to surge across Canada, the Canadian Medical Association (CMA) is raising an alarm about the challenges physicians continue to face ahead of a second wave, including obtaining personal protective equipment and getting access to the flu vaccine.

While there have been improvements in the supply and distribution of PPE, a survey of CMA members found that 54 per cent of physicians continue to encounter procurement challenges.

“We continue to see outbreaks throughout the country and with resurgences of COVID-19 now before us, it’s imperative that governments ensure our front-line workers are protected, not only in hospital settings but also in community practice settings, as they form our first line of defence against this pandemic,” CMA president Dr. Ann Collins said in a press release.

Along with the lack of equipment, physicians expressed further concerns in the survey about the availability of PPE and delays in delivery.

The survey shows that 68 per cent of community-based doctors — those working in offices or walk-in clinics — worry that suppliers will not have sufficient stocks of PPE while 62 per cent expect orders to be delayed.

The survey was conducted between Aug. 19-24 by the CMA, with 1,459 physician members responding.

More than half of those surveyed also said they worry global demand for PPE will hinder Canada’s ability to secure a sufficient supply to help against a second wave of infections.

“More than six months into this pandemic, and we’re still hearing from our members and in fact, over 50 per cent of them are having difficulty accessing PPE for their community practices, and this, in the face of rising numbers of COVID cases,” Collins said in an interview with CTV News Channel on Tuesday.

Despite issues around PPE, Collins said three-quarters of the physicians surveyed believe that the health care system is better prepared to cope with COVID-19 resurgences compared to the first wave.

However, she says physicians are still concerned about outbreaks affecting certain populations including in nursing homes and schools.

“Over 80 per cent of them still expressed very sincere and serious concerns around certain populations that are marginalized and vulnerable,” Collins said. “And also, concern around the impact of schools reopening and how that will affect the PPE supply chain.”

Collins explained that better communication between provincial governments and health agencies acquiring PPE, and those physicians who use it, would help to address shortages.

“What we’re calling for is a co-ordinated response amongst the jurisdictions that are involved and responsible for the accessing and distributing of PPE and also, very importantly for our members, is that there needs to be a clear outreach and communication to them and with them on how to deal with this challenge,” Collins said.

In addition to concerns around personal protective equipment, the CMA found that Canadian physicians are also worried about getting access to the flu vaccine.

More than 86 per cent of physicians who responded to the survey said they fear that the influenza season will put additional strain on the health care system.

Collins said there is “no question” that the flu season will put extra stress on physicians.

“It will put an added demand on community-based physicians to have adequate supply of protective equipment in their office so that they can deliver those vaccines to their patients. It may not just be in their office but in other settings as well, so protection here is key,” she said.

Of physicians who administer the flu vaccine in their practice, 85 per cent said Canada’s health care system needs to build additional capacity to accommodate increased demand for influenza vaccinations this year, with 50 per cent reporting they will not be able to secure enough vaccine doses to meet patient demand.

Fears are mounting among health experts that Canada may experience a so-called “twindemic” consisting of duelling flu and coronavirus outbreaks when cold weather sets in for most of the country.

The Public Health Agency of Canada previously said it expects a higher demand for influenza vaccines amid the combined threat, and is recommending provinces and territories consider alternate ways to deliver immunization programs this season.

“Immunization for influenza is more important than ever this year. We need to avoid a possible twin epidemic of flu and COVID-19 as it can be devastating to patients and our ability to sustain health care delivery,” Collins said in the release.

“We need to focus on greater funding and resourcing of public health to support mass vaccination efforts.”

Collins told CTV News Channel that she expects the influenza vaccine to be available by the end of next month. She added that it is “critical” that all Canadians get their flu shot this year.

“What we’ve heard is that by the end of October it should be available and hopefully by that time it will be in the hands of those public health units, pharmacies, [and] family physicians who will be giving it to Canadians this fall,” she said.