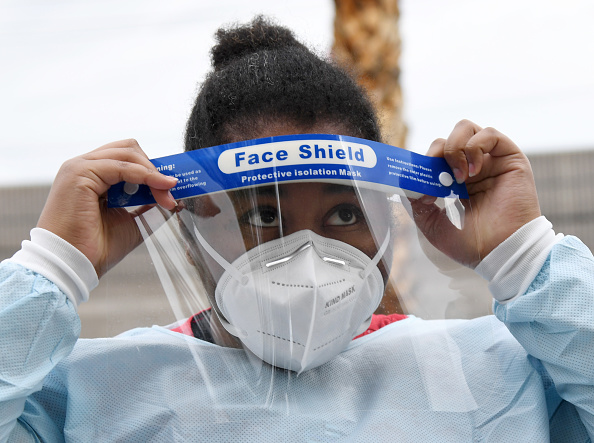 LAS VEGAS, NEVADA – APRIL 06: Certified medical assistant Lakietha Flournoy puts on personal protective equipment as she gets ready to conduct tests for COVID-19 at a drive-up testing station in the parking lot of UNLV Medicine on April 6, 2020 in Las Vegas, Nevada.

As we head into the winter months and the rate of new cases of Covid-19 is expected to rise in the United States, we must take stock of what has worked and what did not in our national response to the virus thus far. Doing so is not an exercise in armchair quarterbacking, but rather a necessary and vital step toward preparation for the second wave and/or next pandemic. Failure to do so would guarantee an inefficient response and, even worse, unnecessarily cost lives.

Nowhere is the need for improvement more apparent than when it comes to personal protective equipment (PPE), which is overly reliant on foreign providers instead of American suppliers. This is not only a public health threat, but a national security risk.

In the early days of the pandemic, stockpiles of PPE were rapidly depleted. Doctors and nurses on the front lines were reduced to wearing trash bags and ponchos for protection — which led to rightful shock and concern from Americans. Makeshift and improvised PPE not only fails those being treated, but the first responders too. By subjecting doctors and nurses to unreliable home remedies, they are being needlessly distracted by worrying about their level of safety and security when they should be focused on the needs of the patient.

And when hospitals, states and others on the front lines asked for more PPE to meet the shortage, the federal government was unable to meet the demand. American companies such as 3M and Honeywell were only able to increase mask production to 70 million a month, which was well short of the 500 million that the Department of Health and Human Services sought.

The natural course of action was to turn to foreign suppliers — whom we were already heavily reliant on pre-pandemic. According to a report by the Federal Reserve Bank of St. Louis, in 2018, of the $29 billion of PPE the United States imported, 28 percent came from China and 18 percent from the European Union. Even more staggering is the fact that 95 percent of N95 masks in the United States are manufactured in China. So when the United States sought to replenish our depleted stockpile, it was confronted with a new challenge: The global demand for PPE caused the U.S. to not be able to acquire the PPE needed to protect first responders. And of the units that we were able to acquire, many were defective and not suitable for use.

Our over-reliance on foreign suppliers put the nation in a dangerous situation and it is one that we could very well face again. Yet, a recurrence of this nightmare scenario is avoidable if we do two key things.

First, we must recognize that while N95 masks are important, they are not as cost effective as other options. They are built for single-use and are often compromised by improper fit, as well as facial hair, moisture and humidity. During a typical shift at a hospital, medical staff will each use multiple N95 masks. Instead, the United States should seek to bolster its supply of Powered Air Purifying Respirators (PAPRs), which provide enhanced protection and security — 99 percent as opposed to the 95 percent offered by N95s. As the CDC notes, these not only are easier fitting than their N95 counterparts, but allow for patients to see the face of the health care worker. Further, they are entirely reusable and can be quickly cleaned after use. The cost benefit is immeasurable.

Next, the United States should shift its dependency on foreign manufactured PPE to domestically produced supplies. By focusing on producing more of these critical supplies here in the United States, as well as ensuring that they are American made, we will be able to more readily meet surges in demand that are produced by a pandemic like Covid-19.

Further, manufacturing these critical supplies here has an economic benefit for Americans and the country as a whole. Doing so would not only provide good paying jobs to American citizens, but there are also geopolitical benefits.

It is no secret that the United States and China are engaged in a new cold war; one where each side seeks dominance through economic power and influence. Placing an emphasis on domestic production of PPE will thereby reduce China’s control over this market as well serve as an effective counter to the Asian nation.

Several American PPE producers have sounded the alarm on the United States’s reliance on foreign-produced PPE. They have the capacity to produce the protective equipment needed by our health care workers and do so at competitive prices. Thankfully, members of the House and Senate have seen the need to boost the national stockpile with PPE that is made in America. In July, Senator Lindsey Graham (R-S.C.) introduced S.4264 the U.S. Made Act of 2020 and Reps. Pascrell (D-N.J.) and McHenry (R-N.C.) introduced the American PPE Supply Chain Integrity Act. Both of these bills go a long way in ensuring the security of our PPE and Congress should quickly pass them.

As flu season approaches and worries about a simultaneous second wave of Covid-19, we need to be prepared as a nation. Using American-made PPE will help us to avoid the shortages of critical supplies that we saw in the spring and help to ensure that they are of the highest quality. Failure to do so would only exacerbate the problems when our healthcare system is stretched thin.