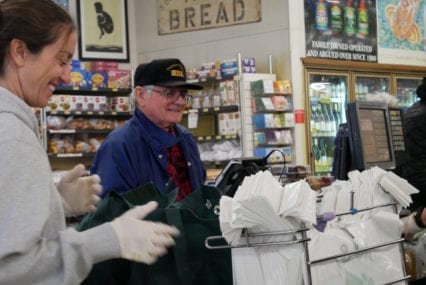 As new strains of COVID-19 circulate across Santa Clara County, South Bay leaders are taking action to ensure essential workers get a pay boost for putting their health on the line.

San Jose leaders this week discussed creating an emergency ordinance that would guarantee select retail food workers an extra $5 per hour in hazard pay. If approved, the hazard pay would take effect immediately and would last until the county’s stay-at-home order lifts.

Meanwhile, the Santa Clara County’s Board of Supervisors also voted this week to draft a “Hero Pay” ordinance that would raise some essential workers’ hourly pay by $5. The ordinance would last 180 days, and apply to employees of grocery stores, fast-food chains and pharmacies.

According to a study published in the journal Occupational and Environmental Medicine, retail workers, including grocery store employees who had frequent contact with customers, were five times more likely to test positive for COVID-19.

San Jose’s hazard pay ordinance — which will be discussed further on Feb. 2 — would apply to large grocery stores with 300 or more employees.

Hazard pay would not be required for smaller neighborhood and ethnic grocery stores, according to Councilmember Sergio Jimenez, who crafted the plan.

Councilmember Dev Davis, the sole dissenter in a 4-1 vote at the Rules and Open Government Committee to advance the proposal, said she’s concerned about prices going up if grocers have to pay hazard pay.

“I’m really very concerned about what happens not just with our food retail workers, but what happens with all of the people who need food in the city who already are having a hard time making ends meet and affording it,” Davis said.

Jimenez along with Councilmembers Sylvia Arenas, David Cohen, Raul Peralez and Vice Mayor Chappie Jones supported the extra pay for workers, many of whom struggle to make up for finance loss if they contract COVID-19.

Some grocers voluntarily instituted increased wages in the form of “Hero Pay” or “Appreciation Pay,” but many stopped these increases despite rising COVID-19 cases. Jimenez said retailers who continued to pay workers extra will receive a credit toward the $5 owed to a worker. For example, if an employer already provides an additional $2.50 per hour in COVID-19 related pay, that employer only needs to provide an additional $2.50 to meet the requirement.

But the impact of COVID-19 hit home for Larsen after Christmas when he started seeing coworkers “disappear.” Management was silent, he said, but he later learned those coworkers came down with the virus.

“I don’t take for granted the daily health check anymore and all the precautions we take to distance, wash hands, wear gloves, sanitize shopping carts, wipe down surfaces,” Larsen told San Jose lawmakers. “So my question to you, city councilmembers, is this: what is my worth? I put myself in harm’s way … It’s only a matter of time before I’m exposed to COVID.”

Santa Clara County’s policy would only apply to companies that are publicly traded or have at least 300 employees nationwide and more than 10 employees per store site.

The board voted 4-1 in favor of the proposal. Supervisor Mike Wasserman abstained because of his financial interests in McDonald’s — one of the companies that would be affected by the rule.

The board considered two almost identical referrals, one from Supervisors Cindy Chavez and Susan Ellenberg, and a separate one from Supervisor Otto Lee. Each request calls for studying similar hazard pay policies in California, including those in San Francisco and Los Angeles counties.

The duplication was due to the Brown Act, which prevents a majority of a board from meeting privately.

But Lee said the fact that three supervisors’ offices had been working on a similar idea highlighted its importance.

County officials will present a final report to supervisors for approval at their Feb. 23 meeting.

“I just want to emphasize: the companies that will be impacted are the companies that have remained opened as other smaller restaurants have been shuttered,” Ellenberg said. “We’re not begrudging these larger institutions’ success during this time … but what I believe we can and must do is make sure that this growth is shared with the heroes they employ.”

Feedback from residents was mixed. Some business owners worried the proposal would cause unnecessary harm, while others said it’s a critical protection for employees.

“For franchisees, the big corporations aren’t paying our bills. We pay our own bills,” said one resident, adding that he operates five fast-food restaurants in Santa Clara and would have to shut down if the hero pay ordinance passed. “We cannot absorb that kind of cost. We’re just a locally owned company. Don’t lump us with a big corporation, because we won’t survive.”

Meanwhile, Maria Ruiz, a McDonald’s employee for two decades, said the $5 boost would improve the lives of workers like her.

“This pandemic has been devastating,” Ruiz said. “We have debts, we have bills that we are unable to pay. (This policy) would be helpful for us and would mean a lot for us.”