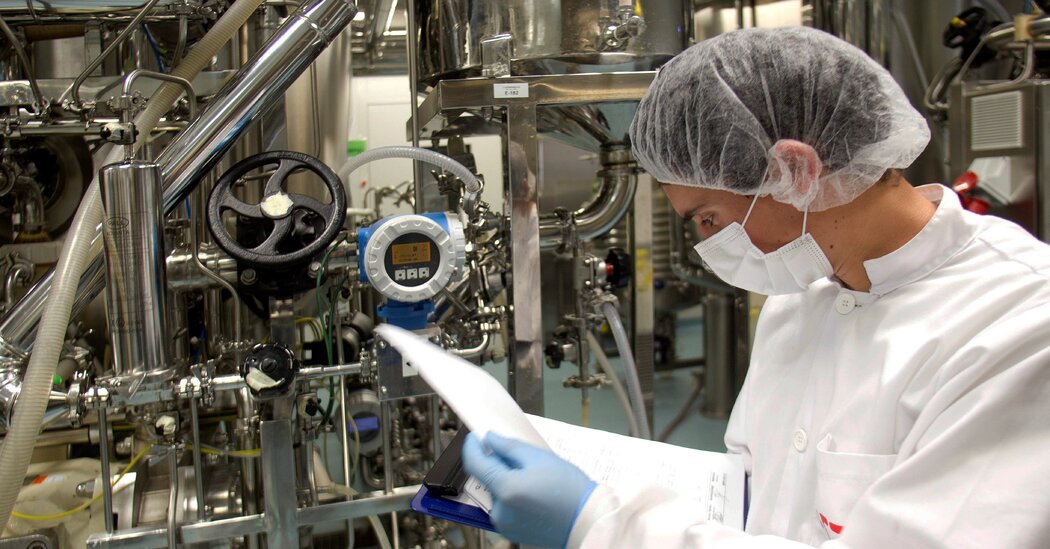 The vaccine maker Novavax said Thursday that it would begin the final stages of testing its coronavirus vaccine in the United Kingdom and that another large trial was scheduled to begin next month in the United States.

It is the fifth late-stage trial from a company supported by Operation Warp Speed, the federal effort to speed a coronavirus vaccine to market, and one of 11 worldwide to reach this pivotal stage. Novavax, a Maryland company that has never brought a vaccine to market, reached a $1.6 billion deal with the federal government in July to develop and manufacture its experimental vaccine, which has shown robust results in early clinical trials.

The new study, known as a Phase 3 trial, is expected to enroll up to 10,000 people in the United Kingdom. Half of the volunteers will receive two doses of the experimental vaccine, 21 days apart, and the others will receive a placebo.

Although Novavax is months behind the front-runners in the vaccine race, independent experts are excited about its vaccine because its early studies delivered particularly promising results. Monkeys that were vaccinated got strong protection against the coronavirus. And in early safety trials, published early this month in The New England Journal of Medicine, volunteers produced strikingly high levels of antibodies against the virus.

It is not possible to make a precise comparison between early clinical studies of different vaccines, but John Moore, a virologist at Weill Cornell Medicine, said that the antibodies from Novavax were markedly higher than any other vaccine with published results. “You just can’t explain that away,” he said.

The Phase 3 trials will determine if Novavax can live up to that promise. Although the British trial is smaller than those of other leading vaccines, the vaccine’s potency means that it might deliver clear results well before the trial is over, said Natalie Dean, a biostatistician at the University of Florida. Researchers analyze clinical trial data at predetermined points during the study.

“That’s one of the reasons why we have those types of analyses — to catch a home run if something is working exceptionally well,” she said.

Paul Heath, professor of pediatric infectious diseases at St. George’s, University of London and the lead scientist of the trial, said that the team would make a special effort to recruit people who are at higher risk of getting sick.

“We will be reaching out to health and social care workers and others who are on the front line, and therefore are more likely to be exposed,” Dr. Heath said.

Novavax said that the trial would seek to enroll at least a quarter of its participants over the age of 65 and that it would prioritize groups that are most affected by Covid-19, including racial and ethnic minorities.

If the surge of Covid-19 continues in the United Kingdom, Dr. Heath said, the trial could determine if the vaccine is effective in several months. “Potentially early next year, we will have certainly seen sufficient numbers of cases for conclusions to be drawn,” he said.

Some vaccine experts said the Novavax candidate showed promise because it uses an older, more tried-and-true vaccine technology compared to companies like Moderna and Pfizer, which are testing vaccine platforms that have not yet been approved for use in people. Novavax’s vaccine uses coronavirus proteins to provoke an immune response, a method that is similar to already-approved vaccines for shingles and human papillomavirus.

“The Novavax vaccine strategy is a well-worn strategy,” said Dr. Paul A. Offit, a professor at the University of Pennsylvania who serves on the Food and Drug Administration advisory committee that will review coronavirus vaccines. “So, you know, we have experience doing this.”

Novavax has lined up a number of manufacturing partners to make the vaccine in huge amounts. In September, a deal with the Serum Institute of India, a major vaccine maker, led Novavax to predict it will be able to produce as many as two billion doses a year.

The vaccine can be stored at between 36 and 46 degrees Fahrenheit, which allows it to be distributed using what the company described as “standard vaccine channels.” Some of the newer vaccines, including those by Pfizer and Moderna, must be stored at subzero temperatures.

But Novavax has never successfully brought a vaccine to market. Its $1.6 billion deal with the federal government represented a huge vote of confidence in a company that has been around for decades but was financially struggling as recently as last year.

The U.K. trial will end when either 116 people develop symptoms of Covid-19, or when 63 people develop moderate to severe Covid-19. At that point, the researchers will “unblind” the results and compare how many of the infections were in the vaccinated group compared with the placebo group.

The trial’s goal is that the vaccine will be at least 60 percent more effective than a placebo.

The company also said it would soon publish its trial design, known as a protocol, following the lead of several other vaccine makers that did so after independent researchers called for more transparency.

Dr. Gregory M. Glenn, Novavax’s president for research and development, said in an interview on Thursday that the company was running a smaller safety trial in South Africa, in addition to the larger Phase 3 trials in the United Kingdom and the United States.

“There are so many things that are uncertain, we need to try to have three shots on goal,” he said. “So that the F.D.A., or anybody, could look at any one of these trials and say, you know, that’s evidence the vaccine is working.”

The company’s U.S. trial will be conducted in collaboration with the National Institutes of Health, and Dr. Glenn said that trial was expected to include 30,000 people and to begin in the middle of October. Johnson & Johnson announced this week that it was beginning a 60,000-person trial of its coronavirus vaccine.

Novavax’s U.K. trial will distinguish itself from competitors because up to 400 of the volunteers will also receive an approved flu shot. This kind of study can be valuable for doctors by determining whether it is safe to give patients two vaccines at the same time.

Dr. Heath said one possibility was that Covid-19 would surge every winter along with the flu. “A scenario where both vaccines can be given at the same time, and thereby minimize disease over the busy winter months, you know, is a good one to push for,” he said.

It also could give Novavax a competitive edge. If it becomes a regular shot that people need to take, some patients might like the convenience of scheduling both vaccines for the same day. Novavax has also developed a flu vaccine that succeeded in late-stage trials but has not been approved by the F.D.A.

“From a corporate standpoint, you can see it,” said Dr. David Bishai, a professor at the Johns Hopkins Bloomberg School of Public Health who studies the economics of vaccines. “This is something that will appeal to some members of the market.”

Dr. Glenn said that the company hoped to eventually combine its flu and coronavirus vaccines into one shot (although this would require more studies and a separate regulatory approval). “I think Covid is not going to go away,” he said.