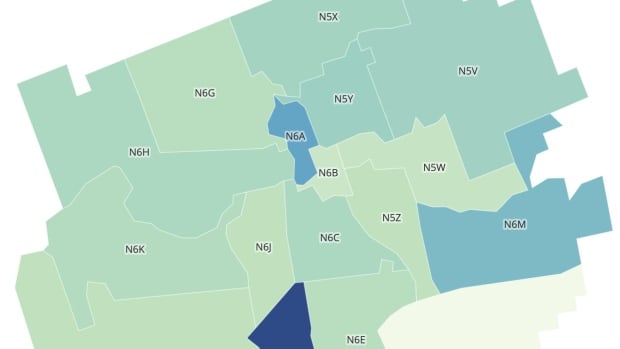 For the first time, Londoners can get a sense of how their part of the city fared during the first wave of the COVID-19 pandemic.

Scroll or tap over the postal codes to see case numbers and per-capita rates. (If you can’t see the map below, click here)

Data obtained by CBC News shows that the far south of the city where the postal code begins with N6L, east of Wonderland Road and south of Highway 401, had the highest per-capita rate of the coronavirus between Jan. 31 and Sept. 15.

The data captures the city’s first wave of coronavirus cases, when outbreaks were mostly contained to long-term care facilities. It is limited to the primary residence of those who tested positive for COVID-19, not where the disease was contracted.

How we got the data

In other jurisdictions, such information is publicly available.

In Toronto, for example, city officials released detailed, geographic information about cases in each neighbourhood in May, and has continued to update the data for anyone who wants to use it.

Dr. Chris Mackie, the region’s medical officer of health, said much of the variation on the map is due to the location of long-term care and retirement homes that had outbreaks during the first wave.

“There is a risk in over-interpreting this data,” Mackie said. “We know that COVID-19 can affect anyone in any neighbourhood.”

In the case of the N6L area, the large per-capita rate is due to a small population, Mackie said. Only just-over 3,000 people live in that area.

“In such a relatively small population, something like one or two clusters in families can skew the data,” Mackie said.

“What is helpful is to see how clustering and outbreaks play a big role. This is a disease that explodes under the right conditions: one sick person in close contact with many other people. We absolutely need to avoid large gatherings right now, and never participate in large gatherings where social distancing is not possible.”

The more information, the better

The more information residents and public health officials have about who is getting sick and where they are cathing the virus, the better, said Don Kerr, a demographer at King’s University College who specializes in the socioeconomic and political consequences of demographic change in Canada.

“It’s interesting to look at the data and to see your own neighbourhood. For example, I live near Huron and Highbury, and I’m surprised to see it has a relatively higher rate of infection than other parts of the city,” Kerr said.

“Londoners have a right to know this kind of information so they can take proper precautions. We know that there are all kinds of risk factors associated with COVID-19 transmission, things like higher-density housing or lower socio-economic status.

“It’s logical that certain neighbourhoods within London are going to have a higher incidence of COVID.”