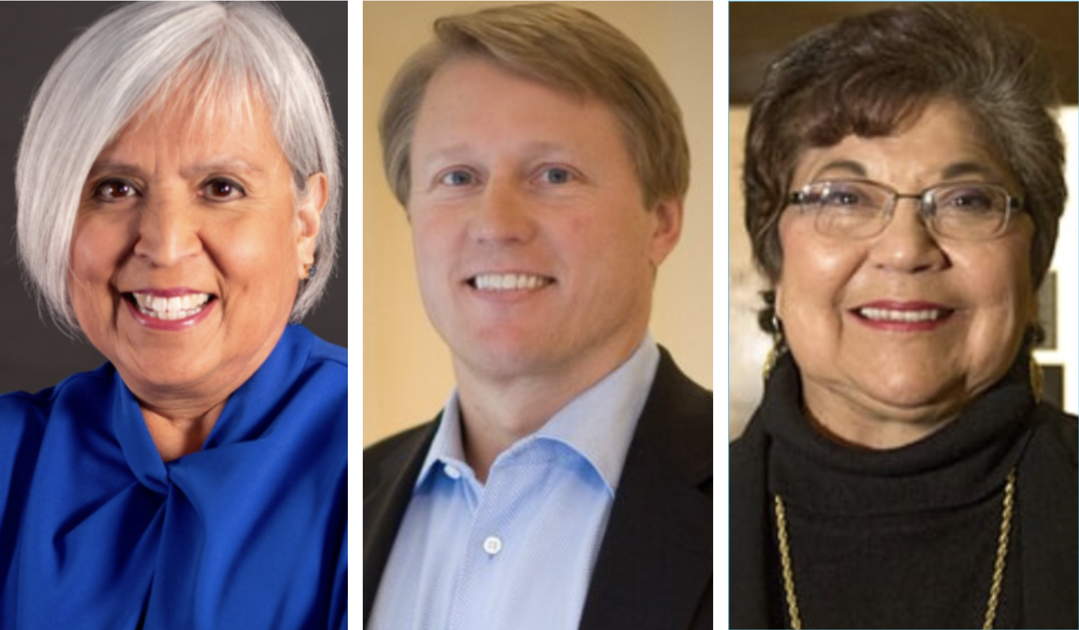 Polly Baca, Kent Thiry and Rosemary Rodriguez lead the latest list of the Colorado Governor’s Citizenship Medals, the highest state honor issued by the sitting Colorado governor each year as vetted and selected by CiviCO.

All three are well-known Denver-based politicos who have worked on ballot questions and other causes aimed at making Colorado a better place to live. They are among eight winners this year.

CiviCO, formerly Quarterly Forum, trains community leadership and provides a forum for mentors to provide would-be leaders “with pathways to a life of significance and community impact — for the future of Colorado.”

“Colorado has a unique opportunity to set the bar for leadership in this country,” Polis said in a statement. “These eight remarkable leaders have paved the way for community advancement and put Colorado on the map for how individuals and organizations serve their communities and make statewide impact.”

The medal was signed into existence in a 2015 executive order by then-Gov. John Hickenlooper, and it’s endorsed by every living Colorado governor.

Besides the five usual awards, Polis expanded the list or honorees to eight to recognizes the heroes fighting the pandemic for “tremendous acts of resourcefulness and courageous efforts” during the crisis.

Here are this year’s medal recipients and their bios, as provided by CiviCO:

This award is given to a business leader who has made transformational contributions to the community throughout his or her career.

Baca led an esteemed career in both state and national politics with 12 years of service in the Colorado state legislature. Polly was the first Latina to co-chair two National Democratic Conventions. She served as vice chair of the National Democratic Party for eight years, from 1981 to 1989. Baca was also special assistant to President Bill Clinton for consumer affairs and director of the U.S. Office of Consumer Affairs.

Baca has spent decades advocating for the people of Colorado through her service in the legislature, her work in national politics and her roles in nonprofits, both as executive director of the Colorado Hispanic Institute and president and CEO of the Latin American Research and Service Agency.

This award recognizes a young community leader who has demonstrated excellence and made a positive impact on his or her school and community.

Ananda Birungi is a recent graduate of Thornton High School and is a freshman at Harvard University in Cambridge, Massachusetts. She served as student body vice president, French Club president and vice president of the Women of Color project to support other young women of color.

In 10th grade, she was selected to participate in Access Opportunity, a six-year college and career access program for high-achieving, low-income students in the Denver metro area. Since being accepted for the program, Birungi has taken advantage of every opportunity presented to her and has proven herself to be an incredible leader in the AO community and beyond.

Birungi also served on the Colorado Youth Advisory Council for District 24, participated in an internship at City Year Denver and started a Girl Up chapter at Thornton High School which is a nationally recognized organization that partners with the United Nations to empower young girls. A Ugandan immigrant, Birungi is a shining young leader who has initiated projects with significant impact in her under-resourced school and broader Colorado community. Most recently, she helped organize the first College Bootcamp at Thornton High School to help rising seniors successfully navigate the college application process. She is an advocate for empowering women through education.

This award is given to an entrepreneur or business leader who has led with exceptional ingenuity and growth while inspiring and creating new possibilities for others.

During this time there, DaVita:

DaVita is known for a distinctively engaged culture and for developing well-rounded general managers/ leaders. DaVita has been the subject of leadership and culture case studies written by both Harvard and Stanford. Kent is regularly invited to speak on these subjects at top business schools, companies and not-for-profit leadership groups. Thiry made a public pledge in 2015 that DaVita would be one of the first Fortune 500 companies to have a majority diverse board, and fulfilled that pledge in 2016.

In 2016, he led Let Colorado Vote, a group that passed two statewide ballot initiatives, one that re-established the presidential primary and a second that opens Colorado’s primaries to unaffiliated voters. In 2018, Kent co-chaired the campaigns of two more successful statewide initiatives (Fair Maps Colorado), in this case reforming the congressional and state redistricting process, eliminating gerrymandering.

Thiry serves on the global board of The Nature Conservancy. He also founded and chairs Colorado Thrives, a group consisting primarily of large Colorado Company CEOs, which is focused on advancing economic mobility and the general well-being of Colorado and all its citizens. He is also the founder and chairman of AdvanceEDU, an innovative hybrid college and is chair of the Colorado Gap Fund, a $25 million fund focused on small businesses with historically poor access to capital, in particular those owned by women, minorities, veteran or those in rural areas.

He co-founded The Aspen Group with Sens. Bill Frist and Tom Daschle, a group dedicated to non-partisan healthcare reform. He is also a founding board member of Colorado Endeavor, a chapter of Endeavor Global, an international venture capital network.

Earlier in his career Thiry served as chairman and CEO of Vivra, a NYSE health care service company; and partner at Bain & Co. Prior board seats include the Harvard Business School Advisory Board, Oxford Health Plan and Varian. Kent is currently an advisor to KKR.

Thiry earned his BA in political science from Stanford University in 1978, with distinction and Phi Beta Kappa. He earned his MBA, with honors, from Harvard Business School in 1983.

He received the Woodrow Wilson Award for Denver corporate citizenship in 2013. In 2016 he received the International Bridge Builders Award from the University of Denver.

Thiry is married to Denise O’Leary, has two children and is an enthusiastic mountain biker and backpacker.

Public & Community Service: Rosemary Rodriguez, Executive Director, Together We Count – This award is given to a government or community leader who serves the public with innovation, operational excellence and progressive vision.

Rosemary Rodriguez is a Colorado native, a proud mother and a long-time civil servant. Rosemary attended Metropolitan State College (now Metropolitan State University), where she studied political science. From 1997 to 2002, Rosemary served as Denver’s clerk and recorder. During her time in this position, Rosemary fought to create a more transparent, accessible and equitable process for all of Denver’s voters regardless of race, gender or socio-economic status. Her passion for improving Denver through democracy led to many positive changes and to the implementation of new procedures that protected every voter’s right to cast a ballot. In 2001, Rosemary chaired the 2001 Colorado Reapportionment Commission, a constitutional body that was responsible for redrawing legislative districts after the 2000 Census. Rosemary served on Denver’s city council from 2003-2007, including serving as City Council president from 2005-2006.

Rosemary Rodriguez has spent her lifetime serving the citizens of Colorado in a number of critical roles. Her goal has always been fair representation and government responsiveness to citizens. Prior to founding Together We Count, a nonprofit organization meant to promote fair participation in the 2020 census, Rosemary was the state director for Sen. Michael Bennet of Colorado. She also served as a commissioner on the U.S. Election Assistance Commission and chaired the commission in 2008.

This award recognizes a Colorado based company that has made a significant positive impact in the community.

Founded in 1899, VF Corporation is one of the world’s largest apparel, footwear and accessories companies connecting people to the lifestyles, activities and experiences they cherish most through a family of iconic outdoor, active and workwear brands including Vans, The North Face, Timberland, Smartwool, JanSport and Dickies.

Headquartered in Denver, VF is a purpose-led company committed to powering movements of sustainable and active lifestyles for the betterment of people and the planet. Through the company’s independent grant making arm, the VF Foundation has contributed more than $20 million globally over the past three years to non-profit organizations that protect outdoor spaces, promote the value of trade work, and contribute to a world that prioritizes equity and belonging for all people. Barron’s magazine recently recognized VF as the top company in its list of most socially conscious companies, and VF continues to have a positive impact on Colorado communities since moving to Denver last year.

The COVID-19 Hero Medal is awarded to individuals and organizations who provided extraordinary effort and impact in response to the pandemic.

Dr. Rachel Herlihy is a preventive medicine physician and the state epidemiologist for the Colorado Department of Public Health and Environment. She has been with the department since 2011. Her position resides in the department’s Division of Disease Control and Public Health Response where she oversees the division’s Communicable Disease Branch and serves as the principal investigator on CDC funded emerging infections program and epidemiology and laboratory capacity grants. Dr. Herlihy is currently leading COVID-19 surveillance, case investigation and outbreak response activities for Colorado.

Dr. Herlihy earned her MD and undergraduate degree in bacteriology and medical microbiology and immunology at the University of Wisconsin. She completed an internal medicine internship at the University of Virginia and a preventive medicine residency at Johns Hopkins University. Previously, she was the deputy state epidemiologist for Utah, and the deputy director for the Department of Defense’s Infectious Diseases Clinical Research Program.

Patrick Meyers is owner and CEO of PEM Enterprises, is the former chief of staff to (former) Gov. John Hickenlooper of Colorado, the chief operating officer for the Hickenlooper 2020 presidential campaign, the chairman of the Hickenlooper 2020 Senate campaign, and is now with the state of Colorado on the COVID Innovation Response Team. Patrick is a graduate of the University of Colorado Denver and the University of California Hastings School of Law and clerked for the Judge William Erickson of the Colorado Supreme Court. Pat served as a clerk and intern in the civil and criminal division for U.S. Attorney’s Office  and Department of Justice Antitrust Division in San Francisco. He served in the U.S. Navy Submarine Service.

Pat has led the Innovation Response Team as the constrained medical supply team leader and has been instrumental in sourcing personal protective equipment and other supplies to the state.

The Colorado Health Foundation is a long-time statewide philanthropic organization focused on bringing health in reach for all Coloradans by engaging closely with communities across the state through investing, grantmaking, policy advocacy and regularly convening Coloradans to discuss and explore tough and complex matters and solutions related to inequity. For more than two decades, The foundation has focused on improving the health of Coloradans, with a specific emphasis in recent years on achieving health and racial equity.