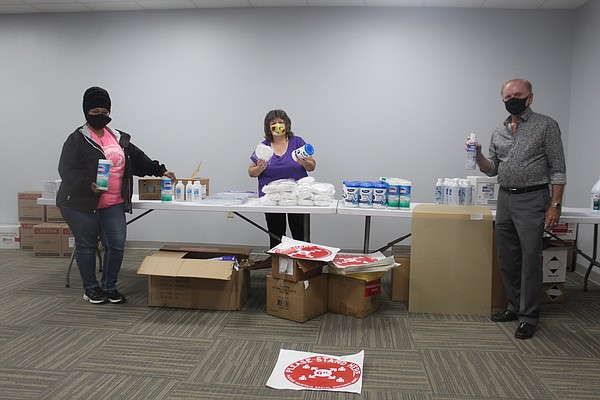 The Union County Election Commission met on Friday, September 25 at 114 E. Elm Street in El Dorado, across from the county courthouse.

At the previous election commission meeting on Friday, August 21, the commissioners discussed the possible need to move several polling places due to six-foot requirements.

This determination was changed after inspections of the locations, however, and a motion passed to not change or close any voting centers that existed during the March primaries.

Early voting is set to take place from October 19 until November 2.

“That’s 30 new poll workers who will be working early voting and, in the process of that, training and going in to work at the regular voting centers. There may be 5 or 6 more to be trained who have requested a chance to be a poll workers,” Williams said.

Rainey asked to be made aware of and have input on the voting center assignments given to poll workers.

Williams informed the commissioners that ten poll workers needed to be assigned per day of early voting to the voting center, launching a discussion about poll worker pay and scheduling for that task in particular.

Williams said a determination had previously been made to pay poll workers $100 per day for early voting and to pay them as contracted workers.

Following more discussion, the commissioners decided to table that discussion until the next meeting to have time to fully research the schedule and specific wording needed for a motion.

The next discussion concerned workers for the pre-election process of opening absentee ballots and determining if the necessary documents and I.D. copy are included. Doing this beforehand allows letters to be sent out to voters who did not include the full documentation.

A list of 14 workers for this process was shared between the commissioners based on names they each submitted. Rainey voiced concerns with the process of selecting the workers and looked to set a stricter rule in place.

“Originally we talked about only having six people counting ballots, which is why I only sent three names and an alternate. We talked about it should be three Republicans and three Democrats. But when I got the list, it had 14 people on it and isn’t evenly divided the way it is supposed to be divided,” Rainey said.

“Is that written somewhere?” Wright said.

“It’s written in the rules and regulations book from the election commission as a best practice to do it that way, to not cause any confusion,” Rainey said.

Rainey made a motion to choose an even distribution of Republicans and Democrats for the process of opening absentee ballots. The measure passed 2-1, with Wright voting against.

Commissioners also went over several items for upcoming meetings, including poll watchers, the impending arrival and publication of sample ballots and posting signs in the Elm Street location’s windows.

Williams also announced that the commission received the Secretary of State’s shipment of COVID-19 PPE and sanitizing supplies since the last meeting. The supplies include face shields, masks, hand and surface disinfectant, plastic screens and alcohol.

She reiterated that voters will be recommended but not required to wear masks and each voting machine will be sanitized after use.

“Nobody should be afraid to come and vote. We have the staff for disinfecting and we have these supplies,” Williams said.

The next election commission meeting will be on Monday, September 28 at 1 p.m. at 114 E. Elm Street.