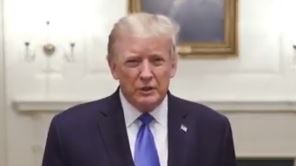 President Donald Trump said that he is postponing talks for another COVID-19 relief bill until after the Nov. 3, a move that will delay or put in jeopardy relief for a wide swath of entertainment industry employees, movie theaters and live event venues.

Trump blamed the delay on Democrats’ demands for relief for state and local governments.

He wrote on Twitter, “Nancy Pelosi is asking for $2.4 Trillion Dollars to bailout poorly run, high crime, Democrat States, money that is in no way related to COVID-19. We made a very generous offer of $1.6 Trillion Dollars and, as usual, she is not negotiating in good faith. I am rejecting their…

“…request, and looking to the future of our Country. I have instructed my representatives to stop negotiating until after the election when, immediately after I win, we will pass a major Stimulus Bill that focuses on hardworking Americans and Small Business. I have asked…

How To Watch Tonight’s Vice Presidential Debate Online & On TV

“… @senatemajldr Mitch McConnell not to delay, but to instead focus full time on approving my outstanding nominee to the United States Supreme Court, Amy Coney Barrett. Our Economy is doing very well. The Stock Market is at record levels, JOBS and unemployment…

“…also coming back in record numbers. We are leading the World in Economic Recovery, and THE BEST IS YET TO COME!”

…also coming back in record numbers. We are leading the World in Economic Recovery, and THE BEST IS YET TO COME!

Stocks plunged after Trump’s announcement. The DJIA, which had been mixed to slightly higher, fell 250 points on the news and was off 266, or nearly 1% in mid-afternoon trade. Hopes of a new stimulus package to aid the faltering economy had propelled the market higher on Monday as well, a big factor in keeping investor sentiment afloat even as the virus ticks higher in numerous states — and across Trump’s own orbit. The S&P 500 and Nasdaq were also down.

Movie theaters especially have been seeking some kind of relief, as venues remain shuttered or are struggling to draw patrons amid fears of coronavirus exposure.

Meanwhile, the $600-per-week enhanced unemployment benefits expired on Aug. 1, and they had been a lifeline for industry workers as the money was extended not just to laid off and furloughed employees, but freelancers and independent contractors.

The House last week passed an updated version of the Heroes Act, a $2.2 trillion bill that extended the $600-per-month in enhanced benefits, and covered an additional layer of workers who made a mix of freelance and employee income.

The legislation also included measures to provide grants to live performance venues, like concert halls and legit theaters, that have been shuttered throughout the pandemic.

The National Association of Theater Owners, meanwhile, has joined with other industry groups, like the Motion Picture Association and the Directors Guild of America, to call for the enactment of the RESTART Act, a new loan program to cover up to six months of payroll, benefits and fixed operating expenses. A portion of the loan would be forgiven based on the revenue losses the businesses incurred in 2020, with the rest repaid over seven years and with no payments due in the first year. NATO also has urged Congress to release funds from earlier COVID-19 legislation so that it can help businesses that have suffered the steepest revenue declines.

House Speaker Nancy Pelosi said in a statement, “Walking away from coronavirus talks demonstrates that President Trump is unwilling to crush the virus, as is required by the Heroes Act.  He shows his contempt for science, his disdain for our heroes – in health care, first responders, sanitation, transportation, food workers, teachers, teachers, teachers and others – and he refuses to put money in workers’ pockets, unless his name is printed on the check.”

Pelosi’s spokesman, Drew Hammill, said that Pelosi and Treasury Secretary Steven Mnuchin talked at 3:30 PM ET and he confirmed that “the president has walked away from COVID talks.”

Jill Goldsmith contributed to this report.