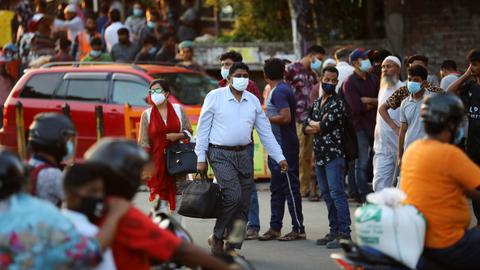 Bangladesh can serve as an example of how telemedicine can help mitigate infection and death, while also helping economies stay afloat during a pandemic.

The global Covid death toll has passed the tragic total of one million, with some speculating that the true figure could be higher due to lack of reporting in many parts of the world.

The World Health Organisation predicted that the doubling of that figure is ‘very likely’.

But that is not unavoidable. Both the direct loss of lives caused by the virus, and the indirect loss of lives and livelihoods brought about by indiscriminate policies in response to it, can be limited with smart, tech-driven policies and transparent models of government action.

Over the last six months, I have seen how the skills of government innovation teams like Bangladesh’s a2i are more important than ever.

This is a unique crisis, requiring novel forms of governance and communication. It is simply not enough to copy and paste reactions from previous crises, like those posed by national security or environmental disasters. Even worse would be to use essentially the same epidemiological approaches developed during the Spanish flu a century ago. Since then, viruses have not changed, but technology and societies have.

Too many countries have been tempted to rely on those old solutions to old problems, meaning the effects of the virus have been worse than they could have been, and trust between people and their governments has been reduced.

This crisis has stress-tested relations between many governments and their populations. It is no coincidence that the pandemic has dovetailed with acts of civil disobedience across the world: where governments cannot demonstrate that they are following the best advice, both medically and economically, public outrage is likely to follow.

This is exacerbated by the loss of civil liberties and livelihoods brought about by lockdowns. The hundreds of millions of ‘new poor’ around the world want to know that their futures were not sacrificed for nothing, or merely for the appearance of doing something.

All these challenges throw up opportunities for improvements in governance and strengthening the bonds between governments and populations.

Transparent, reliable and honest communication with citizens has never been more important. Fear of death and (amongst the poorest) fear of starvation due to pandemic restrictions on working life, can only be calmed when there is trust in authorities to be telling the whole story.

And those hardest hit with the economic fallout must be supported, even in countries without what would be considered extensive welfare systems.

Above all, citizens want to see their government working with the best expertise across the world. Whereas some level of cronyism or bureaucracy may be tolerable some of the time, at times of crisis there is a need for expertise-led policy, rather than something purely political.

Often this will mean South-South cooperation. Gone are the days when high growth or middle-income countries could expect all their solutions to come out of conference rooms in London, DC or Geneva.

The ‘multipolar’ nature of the pandemic response is best demonstrated by the vaccine effort, with trials not only in Europe and North America but also China, Russia and the Middle East.

To address the short and long-term effects of the virus on our health, our economies, and our democracies, we need technology. Tech can transform the relationship between citizens and their governments, and provide access to the information they need to endure crises like Covid-19.

Understandably, many are cautious about change. Privacy issues surrounding big data and algorithms in government can fuel dangerous conspiracy theories and a worrying sense of distrust. The best way of dealing with this is to be clear about the benefits.

Those benefits are game-changing. The digitisation of the economy in Bangladesh has allowed a ‘smart welfare’ system to be rapidly created in the early days of the pandemic. This involved millions of mobile money accounts being created almost overnight, with cash transfers being dispersed to the newly economically vulnerable. It has also allowed accurate, real-time information to be made available to citizens about symptoms and infections. This is essential in a country like Bangladesh (one of the most densely populated in the world) where fear of the pandemic was understandably very high, despite actual cases and deaths being much lower than anticipated.

Most importantly, this kind of infrastructure opens the door to ‘technological epidemiology’. Too much public health is based on exactly the same methods that were available a century ago: keep people locked away as much as possible, and when they are in public keep their faces covered. This is effective, but can only be part of the solution.

Telemedicine allows symptoms to be tracked online without risking the deadly spread of the virus in hospitals, as has been seen in other countries.

The last six months have been a steep learning curve for us all. By using tech and smart, fluid policies, we can stop one million deaths becoming two – with or without a vaccine.

Disclaimer: The viewpoints expressed by the authors do not necessarily reflect the opinions, viewpoints and editorial policies of TRT World.

We welcome all pitches and submissions to TRT World Opinion – please send them via email, to opinion.editorial@trtworld.com