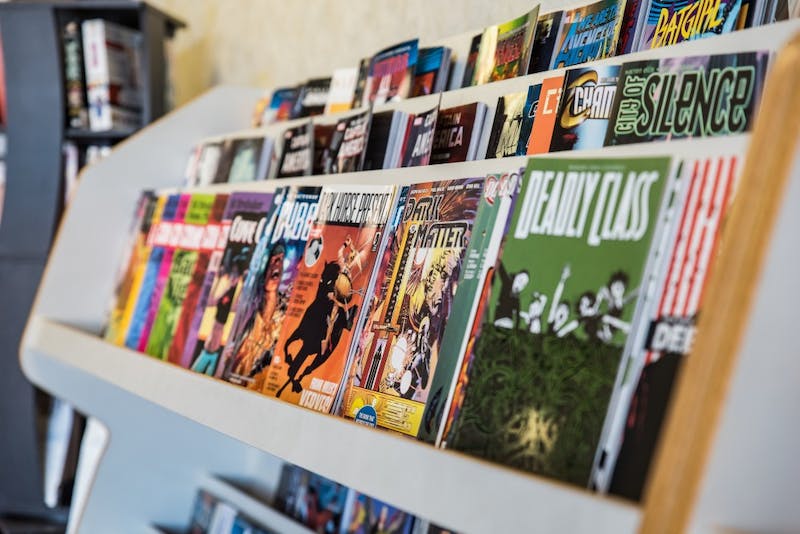 The storylines, characters and artwork have influenced American culture and history for a century.  However, Shuler thinks COVID-19 has accelerated detrimental changes within the comic industry.

DC Comics announced the ending of its 25-year partnership with Diamond Comic Distributors in April, sparking a new contract with Lunar Distribution and UCS Comic distributors.

Shuler said the switch during the pandemic has been harmful to small comic shops like his.

Comic Book E.R. in Cadillac closed its doors in July. Collectors Corner Inc. in Midland has shifted their comic sales to online only. Hall of Heroes was forced to close for a few months with no distributer.

Shuler said Lunar’s response time for emails is 6-8 days, and they charge more for shipping than Diamond did. With the addition of DC, Lunar has 12 times the amount of accounts than before.

“Lunar’s been a nightmare. It took six solid weeks to get the account set up,” Shuler said. “They don’t have a phone number, so you can’t call them.”

As of Sept. 25, Hall of Heroes has only received part of their shipment from Lunar.

This isn’t the only big change DC has made. While attempting to adapt to the pandemic, DC has accelerated going fully digital. Even though print graphic novels and comics make up 91 percent of the industry, compared to the nine percent of the digital market, according to IBIS World’s 2020 comic book publishing statistics.

Steven Goforth, a regular customer at Schuler’s shop, said his go-to publisher is DC. He prefers to have a physical copy of a comic compared to digital. Because he’s so invested in the storylines, he said he’d still read them online if he was forced to, but it wouldn’t be the same.

Marvel makes up 41 percent of the market, DC makes up 27 percent and the other 32 percent is made up of independent publishers like Image and IDW, according to IBIS.

“Right before the pandemic, I saw an article that said the digital people are a totally different animal, and they really are,” Shuler said. “If (comics) go digital, I’ll be selling hardcover books and I’ll be selling toys. I can’t sell digital books.”

Shuler isn’t the only one against DC’s push for digital comics. Corey Brown, a recently hired employee, initially got his comic information from YouTube videos. After spending time inside Hall of Heroes and talking with Shuler, he said he has a better appreciation of comic books.

“The stories and art are hard to appreciate on the phone or tablet,” Brown said. “It’s really sad to see the industry self-imploding when I just got into it.”