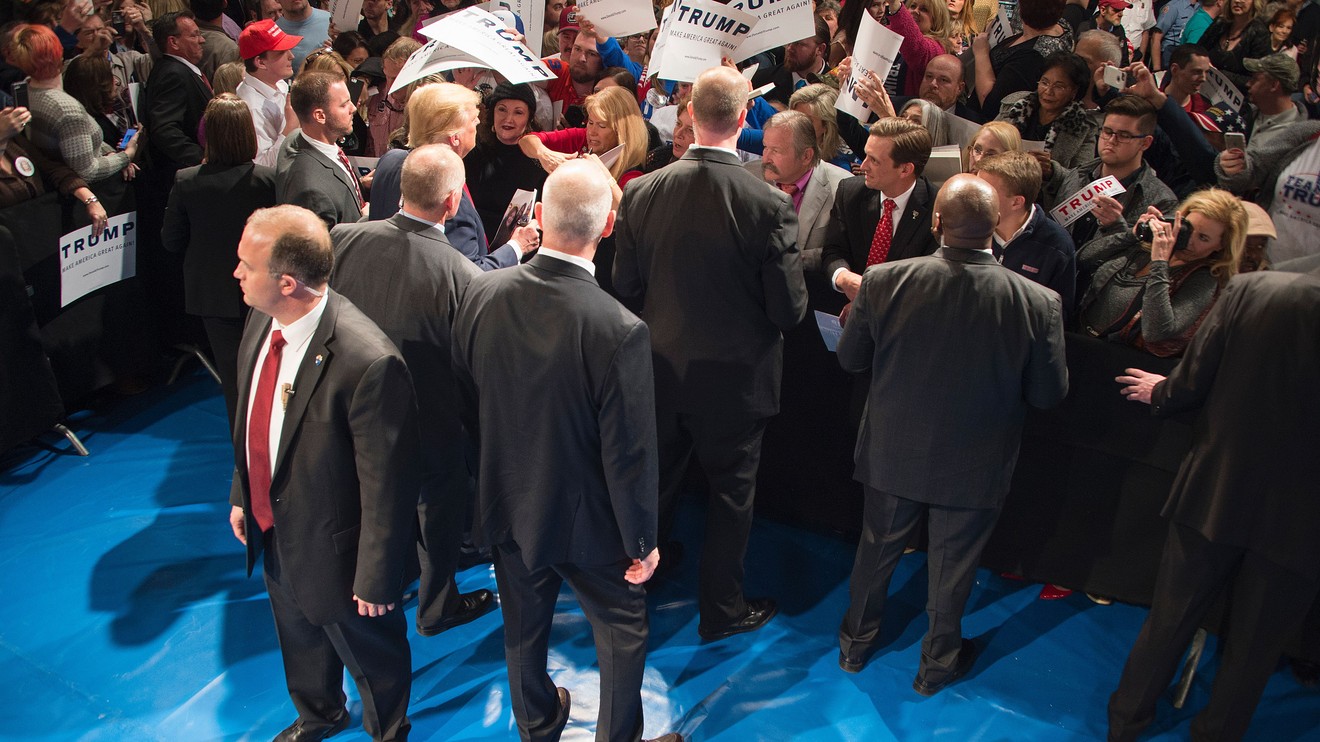 The number of confirmed cases of the coronavirus that causes COVID-19 climbed above 35 million on Monday, as doctors expressed alarm at President Donald Trump’s decision to leave his hospital bed to wave to supporters from a limousine on Sunday, saying he has put all of the people in the vehicle with him at risk of contracting the deadly illness.

On Monday, Trump tweeted that he would leave Walter Reed Medical Center in the evening. He urged people “don’t be afraid of COVID” and “don’t let it dominate your life,” as some “really great drugs” have been developed under his administration.

Meanwhile, the latest U.S. death toll from COVID-19 was 209,938, according to data aggregated by Johns Hopkins University, which is roughly 2,600 more than the total reported by MarketWatch on Thursday afternoon. Trump had tweeted that he tested positive for COVID-19 late Thursday evening.

On Sunday, Trump had said in a video posted on Twitter from Walter Reed that he was getting “great reports” from the doctors. He then traveled by motorcade past cheering supporters near the suburban Washington military hospital, waving from the back seat while wearing a face mask and giving the crowds his signature thumbs-up.

James Phillips, doctor of emergency medicine at George Washington University and attending physician at Walter Reed, took to Twitter to express dismay: “Every single person in the vehicle during that completely unnecessary Presidential ‘drive-by’ just now has to be quarantined for 14 days,” he said. “They might get sick. They may die.”

Phillips said, “For political theater. Commanded by Trump to put their lives at risk for theater. This is insanity.”

Phillips added, “That Presidential SUV is not only bulletproof, but hermetically sealed against chemical attack. The risk of COVID19 transmission inside is as high as it gets outside of medical procedures. The irresponsibility is astounding. My thoughts are with the Secret Service forced to play.”

Read: President Trump is prescribed a third drug to combat his COVID-19 infection

“ ‘Our current best estimates tell us about 10% of the global population may have been infected by this virus. It varies depending on country, it varies from urban to rural, it varies depending on groups. But what it does mean is that the vast majority of the world remains at risk. We are now heading into a difficult period. The disease continues to spread.’ ”

The move came on a day when the U.S. added another 34,491 new cases and at least 332 deaths, according to a New York Times tracker. In the last week, new cases have averaged 43,586 a day, up 6% from the average two weeks earlier.

The U.S. has the highest case tally in the world at 7.4 million, according to JHU data, and the highest death toll at about a fifth of the global total of 1.04 million. The U.S. accounts for just 4% of the global population.

About two-thirds of U.S. states saw an increase in new cases in the last week, according to a Washington Post analysis, suggesting colder weather is driving people indoors, where there is greater risk of transmission.

The highest increases on a per capita basis were in the Midwest and Mountain West, including in Wisconsin, Iowa, Utah and the Dakotas, the paper reported.

Raymond James analysts said Monday that hospitalizations are on the rise in the U.S., too, with the average daily number up 2.6% in the past week.

“The uptick in hospitalizations, a lagging indicator, is concerning and could be a sign of the growing next phase of COVID in the U.S.,” analysts led by Chris Meekins wrote in a note to clients. “Meanwhile, average daily tests increased by around 5% compared to last week while average daily identified cases decreased by around 2%, causing the 7-day average positivity rate to fall from 5.0% to 4.7%. As we continue to anticipate varying trends, we encourage individuals to practice strong mitigation measures so that we do not further increase the virus’s strain on our health care system.”

Global trends are also discouraging, according to Meekins. The number of new cases worldwide rose 6.3% last week to more than 2 million, while fatalities rose 3.9% to 39,257. Governments in Europe are considering new measures to restrict movement after a fresh surge in cases across the continent.

The World Health Organization said Monday that roughly one in 10 people may have been infected with the novel coronavirus by now — meaning most of the world’s population is still vulnerable.

“Our current best estimates tell us about 10% of the global population may have been infected by this virus,” WHO top emergency expert Dr. Michael Ryan told the executive board, as the Guardian reported.

• Bars and cafés in Paris will be closed for two weeks under new measures being imposed to stop the spread of the virus, according to local media reports. Paris has been hit by rising cases, increasing hospitalizations and deaths months after it lifted a nationwide lockdown. “These are braking measures because the epidemic is moving too fast,” Paris police chief Didier Lallement told journalists. “From tomorrow, all bars will be closed.” France counted nearly 17,000 new cases on Saturday alone, the highest number since it started widespread testing.

• The official U.K. COVID-19 tally spiked this weekend — because of a backlog caused by a Microsoft Excel error. According to Public Health England, 15,841 cases between Sept. 25 and Oct. 2 weren’t uploaded to the government dashboard, because the column limits on an Excel spreadsheet reached the maximum size. The mistake was made worse because those details weren’t passed to the country’s test-and-trace operations. The issue has been solved by splitting the Excel files into batches, according to the Daily Mail. The U.K. case tally has now passed 500,000, and stands at 518,214 and its death toll is 42,440, the highest in Europe and fifth highest in the world, the Johns Hopkins data show.

• Russia reported 10,499 new infections on Sunday, the highest number of new cases since May 15 at the peak of the crisis when lockdowns were still in effect, the Guardian reported. Moscow is now considering another strict lockdown to curb the spread, according to the newspaper Vedomosti. Russia has 1.2 million cases, fourth highest in the world, and 21,375 fatalities.

• The head of the European Commission, Ursula von der Leyen, is self-quarantining until Tuesday after being told she had participated in a meeting last week attended by a person who has since tested positive for COVID-19, German broadcaster Deutsche Welle reported. Von der Leyen tested negative on Monday, but she will remain isolated as a precaution.

There are now 35.3 million confirmed cases of COVID-19 worldwide, the Johns Hopkins data show, and at least 24.6 million people have recovered.

Brazil has the second highest death toll after the U.S. at 146,352, but third highest case tally at 4.9 million.

China, where the illness was first reported late last year, has 90,640 cases and 4,739 fatalities, according to its official numbers.

What are companies saying?

• 3M Co. MMM, +1.49% has launched an aggressive legal effort to prevent the sale of fraudulent personal protective equipment products during the coronavirus pandemic. The diversified industrial company and maker of Post-it Notes has established hotlines around the world and is working with local law enforcement to stop profiteers seeking to take advantage of demand for its products during the pandemic. 3M is a major manufacturer of face masks and N95 masks and other equipment. The company has investigated more than 7,700 fraud reports globally, filed 19 lawsuits and been granted nine temporary restraining orders and seven preliminary injunctions, it said in a release. “More than 13,500 false or deceptive social media posts, over 11,500 fraudulent e-commerce offerings and at least 235 deceptive domain names have been removed,” the company said. “3M has been awarded damages or has received settlement payments in seven cases, with all proceeds being donated to COVID-19 related charities.” The company also said it has no plans to raise the prices of its respirators as a result of the pandemic.

• Apogee Enterprises Inc. APOG, +6.04% is resuming its share-buyback program after temporarily suspending it in April due to the uncertainty created by the pandemic. The maker and installer of glass said it has about 2 million shares remaining in its authorization. The company also said it has identified cost savings of at least $10 million to $20 million on an annual run-rate basis by end fiscal 2023. “The costs to implement such opportunities are likely to be recognized during the latter part of the fourth quarter of fiscal 2021 and during fiscal 2022,” the company said in a regulator filing. “These SG&A reduction opportunities are in addition to the cost savings actions, of $40 million on an annualized basis, referenced in the Company’s second quarter earnings release, dated September 17, 2020.”

• Fantasy sports and sports betting operator DraftKings Inc. DKNG, -5.06%  is offering 32 million shares in a syndicated deal, joining the many companies raising equity and debt at record levels during the coronavirus pandemic. The offering consists of 16 million shares that are being offered by DraftKings and 16 million being offered by certain selling shareholders. The company won’t receive any proceeds from the latter. Proceeds from its own offering will be used for general corporate purposes. Credit Suisse and Global Sachs are underwriting the deal.

• Targa Resources Corp., TRGP, +10.76%  the natural gas transportation company, announced a $500 million stock repurchase program, and said its overall business has been “strong” in the face of the pandemic. Based on Friday’s stock closing price of $14.31, the new buyback program could represent up to 34.94 million shares, or about 15% of the shares outstanding. The company now expects its 2020 adjusted Ebitda (earnings before interest, taxes, depreciation and amortization) to be at or around the high end of its previously provided guidance range of $1.500 billion to $1.625 billion, and its 2020 net growth capital spending to be around the low end of its outlook of $700 million to $800 million. “Our expected strong performance and lower growth capital spending through the second half of 2020 creates additional free cash flow, which positions us to continue to execute on our strategy of reducing leverage over time,” said Chief Executive Matt Meloy.