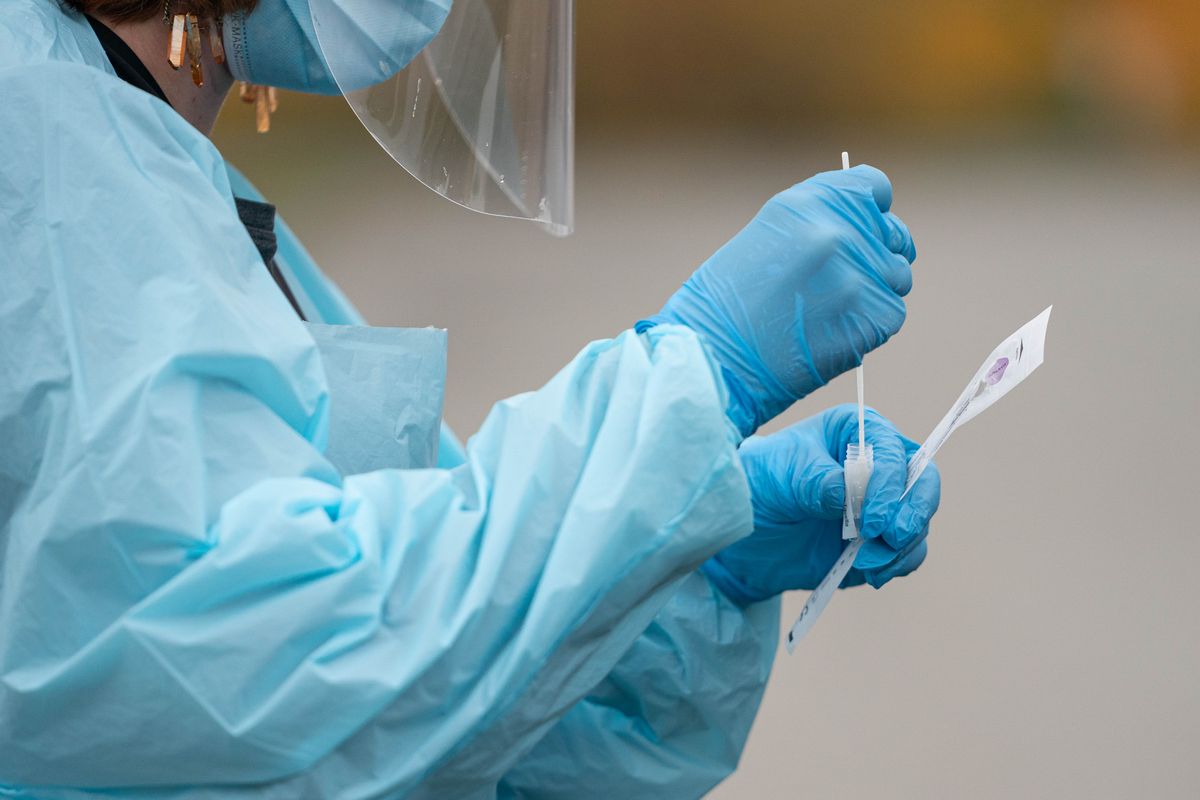 Alaska’s COVID-19 cases rose through September even though fewer Alaskans got tested for the virus that causes the highly infectious disease.

But there are also growing numbers of COVID-19 critics who simply don’t want to get tested and are discouraging others from doing so, top health officials say. Maybe they’re suffering from “COVID fatigue” after months under pandemic restrictions. Or maybe they believe fewer positives will lead to reopened schools and businesses. President Donald Trump, who was hospitalized after testing positive for COVID-19 last week, has discouraged broad testing several times during the pandemic.

Somebody with COVID-19 is most infectious two days before they detect symptoms and two days after — and 20% to 40% of people with the virus may not have symptoms at all, according to Dr. Anne Zink, Alaska’s chief medical officer. That’s why it’s important to test as much as possible: to make sure positive cases are caught before the virus spreads into vulnerable populations like senior-care centers or leads to bigger outbreaks that can really shut things down.

Zink gets angry emails from testing skeptics, fields questions on town hall forums, and hears from health workers. Some call the virus a hoax or label the test a “DNA biopsy” they want no part of.

Zink also experiences skeptics first hand in the emergency-room shifts she still works at Mat-Su Regional Medical Center near Wasilla: patients rejecting a test because there’s no way they have COVID-19, or saying they’d rather quarantine at home than be subjected to that nasal swab.

“I don’t know how prevalent it is … we don’t have a good survey on that,” she said in an interview last week. “But I do know that our testing has gone down, it’s not supply chain, and our percent positivity has gone up. So those are the objective things I have to work on.”

One Anchorage business owner who didn’t want to be identified said he’s skeptical of the amount of testing being done on people without symptoms who then test positive and drive up case rates without being sick.

For him, getting swabbed over what could be allergy symptoms, or without symptoms at all, feels unnecessary especially if a new case adds ammunition for business closures destroying financial and personal lives, sometimes to the point of suicide.

But he also said he’d get tested if he had clear symptoms.

For others, there’s no reason to get tested at all, as voiced by one viral post making the rounds on social media in mid-September.

A member of the private OpenAlaska Facebook group shared the debunked post from English conspiracy theorist David Icke. The group has 7,100 members who tend to press for an end to coronavirus-related restrictions like mask mandates, school closures, and business capacity limits.

“Can people just stop getting tested ? You do realise you are adding to the problem and taking us into a 2nd phase lockdown? YOU are giving the government the number of cases and the powers to take us into a winter lockdown? Just stop the testing and this will disappear overnight ….,” Icke’s post states. “If you are well enough to get yourself to a testing centre then your absolutely fine, stay at home for 2 weeks just to be safe, eat well and take your vitamins and then crack on!”

The post drew 89 likes and nearly 20 comments in favor, including from a few people who chose to stay home rather than get tested.

The resistance to getting tested is understandable, said Tom Hennessy, an infectious disease epidemiologist and affiliate faculty member at the University of Alaska Anchorage. People might fear the result and the consequence it would have on their workplace, employability or school.

“However, in the long run, unless people who have symptoms of COVID get tested, we can’t control the epidemic and ultimately, that hurts all of us by spreading the epidemic further,” Hennessy said last week. “So I think getting tested is an important civic responsibility. And it’s a step people need to take, even if it may be personally inconvenient for them.”

Statewide, COVID-19 test levels dropped from a high of more than 130,300 in July to just under 74,000 or so in September, according to the Alaska Department of Health and Social Services. More recently, weekly testing averages fell from nearly 24,000 in late August to just under 21,000 in late September.

But now, perhaps because more people are getting symptoms as the virus gains ground, or maybe because surging case numbers are making them more alert, testing levels are climbing again.

We’re making this important information about the pandemic available without a subscription as a public service. But we depend on reader support to do this work. Please consider joining others in supporting independent journalism in Alaska for just $3.23 a week.

Municipal testing sites in Anchorage started seeing an increase in people wanting to get tested about two weeks ago, officials say. First, testing volume increased by about 25%. Last week, it jumped by 75% as compared to fairly steady numbers in August.

The Fairbanks Memorial Hospital lab has processed more tests than they’ve seen in the last few months, up to 250 tests a day, according to Cassandra Khesed director of laboratory services there.

Tanana Chiefs Conference, which serves 42 tribes and has clinics in 26 villages in Interior Alaska, ran their highest number of tests last week, according to Alisa Alexander, senior medical officer there. At the same time, she said, they’ve also had a record number of positive test results.

In Mat-Su, where Capstone Clinic operates drive-thru testing sites, more people got tested in September than August, in part because schools here opened in late August, according to co-owner Dr. Wade Erickson. Testing was also up at Capstone’s Kenai site.

“I don’t find anybody refusing testing,” Erickson said. “They’re more than happy to get tested.”

Even now, Alaska’s testing rates remain among the best in the country.

Alaska has done almost a half-million tests, a number that reflects an aggressive testing strategy but also the thousands of summer seafood workers and travelers required to get sometimes multiple tests to meet state mandates meant to protect the state from people importing COVID-19 from Outside.

All those relatively healthy people who had to get tested drove down the state’s test positivity rate, the number of positive results out of the total performed used to gauge whether there’s enough testing to halt the spread of the virus.

Now, while we’re still one of the most-tested states in the country, our test positivity rates are rising toward the 5% alert level that health authorities consider the bar indicating not enough testing. Alaska’s goal is to keep that level below 2%, given our limited health-care capacity and isolation.

The statewide positivity rate as of Tuesday was 4.09%, nearly the highest Alaska has seen. That number stayed below 2% through most of August. The national average as of Monday was 4.8%.

Other measures of the virus remain relatively positive. Fifty-eight Alaskans have died with COVID-19, the fewest virus-related deaths per capita of any state, but a number that increased sharply in recent weeks, in part due to reporting delays.

So far, the number of people hospitalized with the virus has remained fairly steady — even declining lately — though Anchorage officials say they’re seeing more older patients at greater risk for severe illness or death. They’re concerned that the current case spike will threaten ICU capacity this fall.

Generally, health officials say, they’re finding it easier to treat the virus now than when the pandemic started. There are adequate supplies of masks and other protective gear.

Those are advantages the state lacked in March, Zink said.

The disadvantage, she said, is the desperation and misinformation — “Why are we getting tested? Why is this even happening??” — spawned by months of restriction and limits.

“The longer this pandemic wears on, for very natural reasons, it’s hard to hold on,” Zink said. “And so I think that’s the outgoing tide that we’re fighting.”