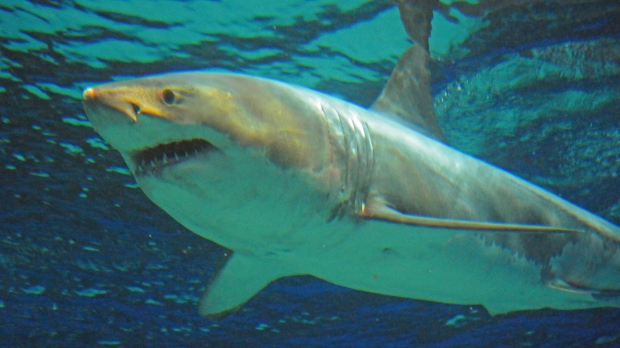 TORONTO — According to a shark advocacy group, the production of a COVID-19 vaccine could result in the deaths of nearly 500,000 sharks worldwide.

Shark Allies, a non-profit aimed at raising awareness about shark conservation, is warning that commercial production of a vaccine with an adjuvant could wipe out hundreds of thousands of sharks because of an ingredient found predominantly within the livers of these deep-sea creatures.

An adjuvant is a substance added to vaccines to spur a more robust immune response. It can also lower the level of vaccine needed for each patient, which could be very valuable for a vaccine that needs to be produced for a large number of people at once.

There are different adjuvants for different vaccines, but some vaccines for influenza strains are made using squalene oil, a naturally occurring substance found in the livers of sharks, as well as in humans and other animals.

Sharks are the predominant source of squalene for commercial and medical use. One of the most common adjuvants made using shark squalene is MF59, which is found in influenza vaccines such as Fluad.

At least one company looking to produce vaccines for COVID-19 has said they will be using adjuvants. GlaxoSmithKline (GSK) announced in late May that they intended to produce 1 billion doses of their “pandemic vaccine adjuvant” in 2021 for several vaccine collaborations they are involved in. GSK has used AS03, an adjuvant produced using shark-based squalene, in influenza vaccines before.

One of their main collaborations is with Sanofi Pasteur, a large vaccine producer. Together, they already have a vaccine candidate in clinical trials.

Shark Allies estimates that more than 21,000 sharks would have to die to supply enough of an adjuvanted vaccine for the United States alone.

They have launched a petition asking for vaccine manufacturers to consider other options for making adjuvants, which has already garnered more than 10,000 signatures as of Sunday evening.

The advocacy group stressed on their website and the petition that they do not want to slow down any vaccine productions, but are simply asking for manufacturers to use non-animal squalene, as the substance can be created using plants as well.

“Shark squalene production requires relying on a finite, wild animal population,” the petition states. “Most shark species are already at critical levels and will not withstand an increase in demand for a global vaccine.

“The supply chain has never been tested at the scale that a coronavirus vaccine would demand.”