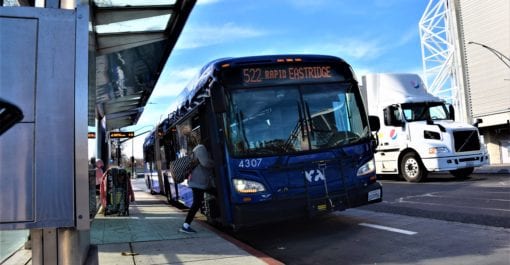 Driving a bus isn’t easy and the public would do well to remember that as it considers the concerns VTA’s bus operators are raising about what the organization is doing to protect them during the pandemic.

Bus operators are responsible for safely operating their vehicle, for the safety of pedestrians and other drivers with whom they share the roads and for the safety of their passengers while onboard. The job doesn’t end there. They collect fares. They communicate with dispatchers about obstructions and passenger issues. They do light janitorial work and act as customer service too, giving directions and answering questions about timetables and fares.

If you’ve worked in customer service, you’re probably aware that the customer is not, in fact, always right. Some want to avoid paying fares or they want to argue about it. Some want to harangue the operator when they are late due to conditions beyond their control.

And since March 2020, some want to argue about wearing a mask.

VTA’s union leadership wants the agency to make some additional accommodations to help protect drivers while mitigating some of the issues that can lead to heated arguments with customers. And most reasonable people can agree that, we need to take all reasonable steps to protect people who work in the public during a pandemic.

In the public transportation industry, agencies often tell operators to make a reasonable effort to collect the fare. But if the situation becomes unsafe, police or security are called in to mediate.

But what happens when personal safety is the reason for the conflict?

Since the start of the pandemic, 164 VTA employees have contracted COVID-19. Not all of those infections were work-related. Based on VTA’s best data, most of those infections did not occur at work. But inexact information offers a murky picture for what might be behind the recent spike in infections.

According to VTA’s most recent statistics, most employees tell them they don’t know where they may have contracted the virus. Of those who can shed more light, most report a family member or friend is the likely source of their infection, with just a small fraction of the total number of infections reportedly taking place at work.

That number can be further reduced when you look into those workplace reports. Some occurred between co-workers rather than between operators or customers, and others are less clear.

This is consistent with data collected across transportation providers nationwide. According to a story that appeared in the New York Time’s on Aug. 2, 2020, during a study conducted in Paris public health authorities found that none of the 386 infection clusters they tracked between May and July could be connected to public transportation. Public health officials in Japan and Austria had similar findings – public transportation didn’t appear to be a major source of transmission. This should be good news for transit workers.

But as infections among front line employees at VTA have risen, tensions between union leadership and management seem to be growing. Union leaders asked for a return to rear-door boarding – a practice the agency adopted early in the pandemic, among other accommodations requested to help mitigate a spike in employee infections. VTA reinstated front-door boarding so that it could collect fares when the infection rates were lower last spring and summer.

The agency agreed to temporarily return to the rear-door boarding practice while it monitors infection rates among operators.

The rates are likely to drop. Whether they will go down because VTA changed this practice or not will still be tough to say. The fact of the matter is, VTA operators can’t definitively say that front-door boarding is the cause of the increase. Given the fact that most reported infections at the agency come from “unknown” sources, who’s to say that the infection rates aren’t rising now because the rate has been climbing steadily throughout the region? And who’s to say whether the infection rates will drop because of an operational change or because infection rates regionally are going down? Something that already appears to be taking place naturally, occurring to the most recent data.

VTA reports it is still operating at about 25% of its pre-pandemic ridership. This means operators have far fewer passengers onboard those buses – and those still choosing to ride are likely to be those who most need the service. The goal should be to do everything possible to keep operators and passengers safe, while making the service as widely available as is possible.

It’s heartening to see the agency’s leadership responding to operator concerns. Returning to rear-door boarding is the right thing to do as the pandemic rages.

The union should work in partnership with the agency to encourage employees to be as forthcoming as possible about the sources of their infections because it’s in the best interest of the agency, its employees and the general public at large. No employee should feel targeted for fully reporting the details of their infection to help minimize the risk of workplace spread.

But at the end of the day, union leadership shouldn’t seek to vilify customers any more than they want their employees to be scapegoated by management. Most customers are just trying get around on a system that is already operating on a reduced schedule, which makes it tough for those in our community who are transit dependent to do much of anything. There’s isn’t much data to suggest that public transportation customers are a major source of infection among employees or fellow users.

Coronavirus is a problem requires us to put all divisions aside – and to the degree that those in leadership positions are able – they should seek to bring people together, not take advantage of those divisions. We’ve seen what division gets us – millions infected and hundreds of thousands dead. More unity is the best prescription to heal in the wake of this virus.