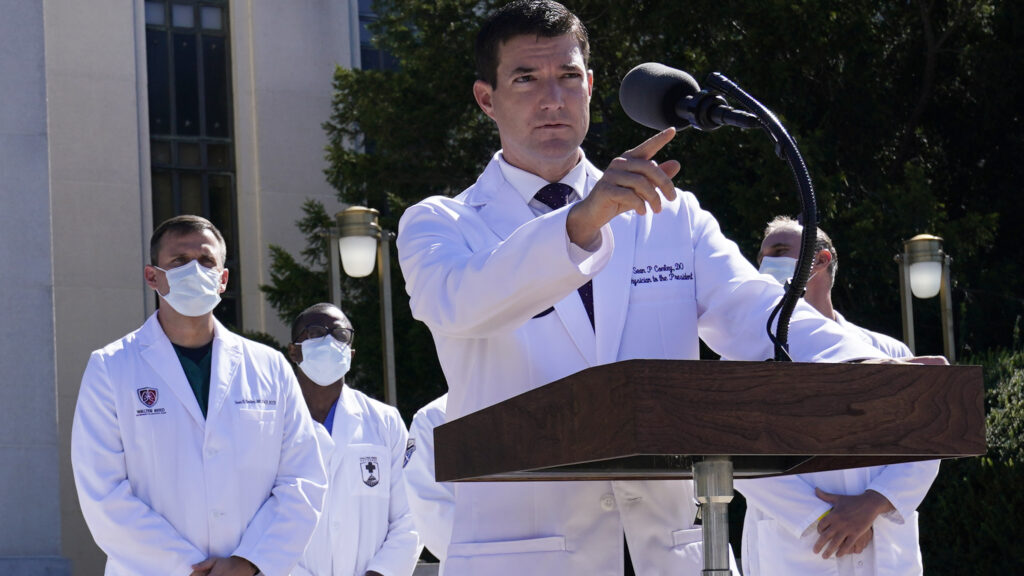 The information that could ease American minds, quash conspiracy theories, and slow a rapacious 24/7 news cycle around President Trump’s case of Covid-19 could fit in a few paragraphs that would not fill a single page, several doctors tell STAT.

So why, they wonder, has none of that information been included in a 15-minute press briefing and three short memos released by the president’s physicians?

“The fact that it is this vague and unclear at this moment is unacceptable,” said Ashish Jha, dean of the Brown School of Public Health. “Somebody knows, they should just level with the American people.”

Instead, the press conference on Saturday featured evasion, limited information, and, afterward, a correction about a key, simple point: how long it has been since Trump was diagnosed with the disease. Also unclear: whether he got oxygen, and what his vital signs are. Without that information, it’s simply impossible to know how Trump is doing.

“It’s all very limited by lack of transparency,” said Mangala Narasimhan, director of critical care services at Northwell Health in Lake Success, N.Y. “So that makes it very hard to comment on it.”

Here’s what they need to know:

1. A timeline of when the president has been tested

One of the most shocking parts of the story, Jha said, is that at the press conference, the doctors said Trump had been diagnosed 72 hours earlier, but then walked that back to say it had only been since Thursday night, when a confirmatory PCR test came back positive.

“The idea that you would get that wrong, it’s really surprising to me,” Jha said. “If you’re going to go speak to the nation about the president’s health, timelines are pretty important. The idea that they misspoke on those timelines is surprising.”

Sean Conley, the president’s physician, said Trumps’ oxygen saturation, or SpO2, was 96% Saturday morning. That’s a good number, but the physicians STAT spoke to said getting a figure at a single point in time was not enough. One needs to know what the lowest value seen was, and how the number changes if Trump is moving around.

“It may not be big shifts, but people can go back and forth,” said Nahid Bhadelia, medical director of the Special Pathogens Unit at the Boston University School of Medicine. A patient who is fine in the morning may have trouble breathing in the evening.

A chest X-ray, and possibly a CT scan, would be among the most basic and informative information about the president’s health. Conley mentioned giving frequent ultrasounds, but did not mention these more normal tests. A description of them could shed a lot of light, and the images themselves would be worth 1,000 words. “It would be nice to see his pictures,” said Narasimhan.

4. Laboratory and other diagnostic data

Trump’s breathing rate would be informative, as would his heart rate over time. Laboratory values such as c-reactive protein, used to measure inflammation, would give physicians an idea of how he was doing — and allow them to convey that to the public.

The physicians all said that the treatment plan for the president was basically sound, although many had questions about the drug regimens he is receiving. Bhadelia noted that most of the treatments Trump is getting are not recommended by Covid-19 guidelines released by the National Institutes of Health.

Treatment guidelines say not to give zinc, which Trump is receiving. He is also receiving vitamin D, the ulcer drug famotidine, melatonin, and a daily aspirin. It’s as if the doctors said, “If there’s no way it’s going to harm him, let’s throw the kitchen sink at it,” Bhadelia said.

Narasimhan noted that there were doctors who believed in all the various treatments, but that evidence for most of them is limited. “All the things he’s taking are sort of not really the normal cocktail,” she said. Patients who are doing as well as the president is said to be, normally receive what doctors call “supportive care” — fluids and drugs to reduce symptoms.

The president is receiving a cocktail of two monoclonal antibodies from Regeneron, which is not authorized by the Food and Drug Administration, and remdesivir, made by Gilead Sciences, which has been granted an emergency authorization for use in hospitalized Covid-19 patients. Bhadelia said obtaining access to unapproved drugs is not unusual with some emerging infectious diseases, and that using the antibodies made sense because, under the limited data released, this was the right time to give it, to keep the illness from getting worse. Adding remdesivir is logical because the two drugs might be synergistic, though that is unproven.

But both Jha and Narasimhan said they would not have reached for the Regeneron antibody. Data for it was presented at a company press conference only on Tuesday.

But the bigger concern is that, based on the information available, it’s impossible to say much about how the president is doing at all.

Correction: A previous version of this story misstated how big a drop in oxygen saturation would be a warning sign.