In May 2020, Union Minister for MSME (micro, small, and medium enterprises) Nitin Gadkari warned that India’s MSME sector — which contributes a significant 37.54 percent to the country’s overall GDP — was on the verge of collapse

Shutting of factories, disruption of supply chains and decrease in sales of non-essential items due to the extended nationwide lockdown brought business activity to a halt and exacerbated the liquidity crunch in the MSME sector.

With MSMEs desperate for financial aid after 20 to 30 percent decline in their revenues, Finance Minister Nirmala Sitharaman rolled out a slew of initiatives in May under the Rs 20 lakh crore Aatmanirbhar Bharat stimulus package.

The schemes were announced to make India self-reliant at a time when production processes and supply chains were disrupted.

Of the 15 schemes announced by the FM, six were for MSMEs. Three policies that stood out were the Rs 3 lakh crore collateral-free loan scheme, the Rs 20,000 crore subordinate debt for MSMEs and the Rs 50,000 crore equity infusion through the Funds of Funds (FoF).

SMBStory does a deep-dive into how these three schemes are helping Indian MSMEs and what the sector has to say about the implementation and impact of the schemes. 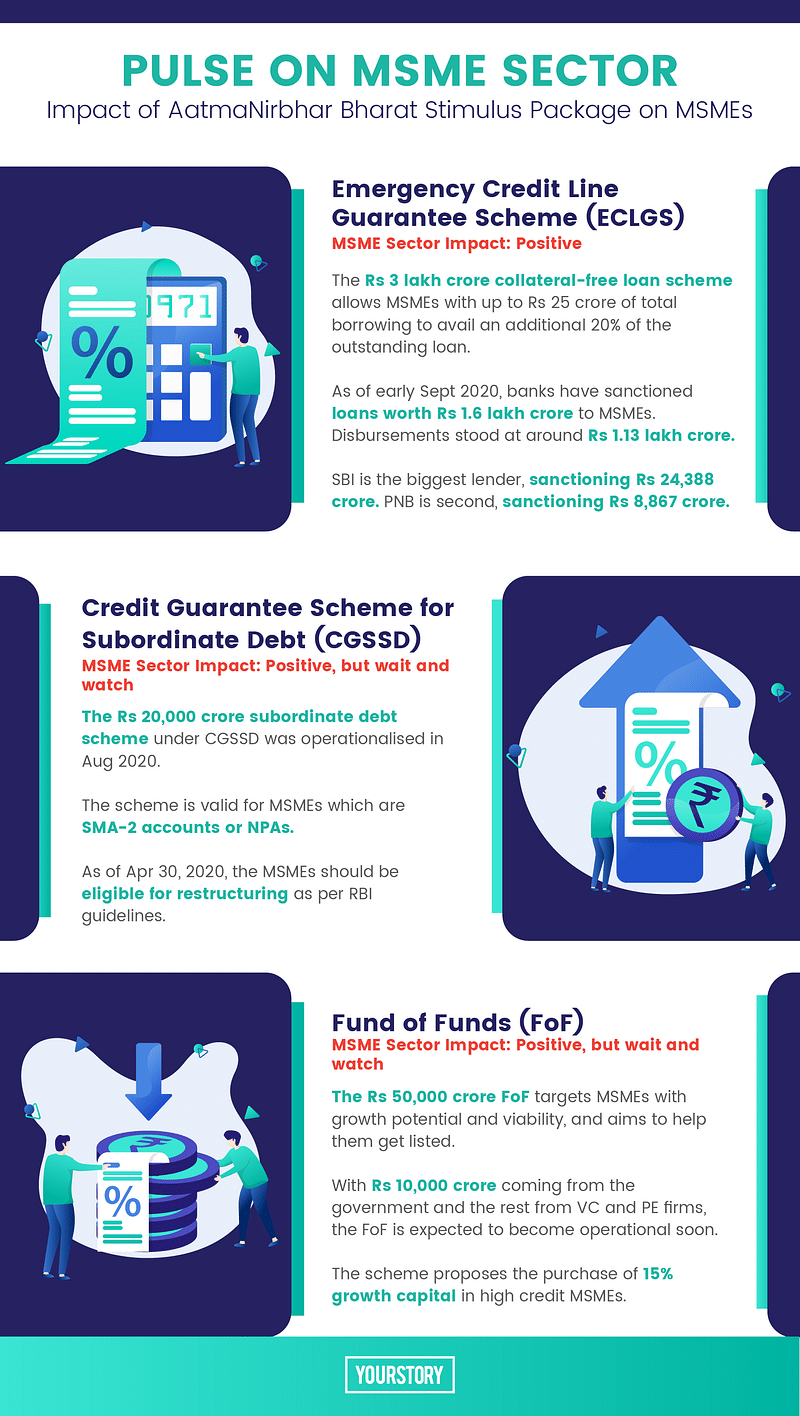 So far, under this scheme, banks have sanctioned loans totalling Rs 1.6 lakh crore to MSMEs under the scheme. Disbursements stood at around Rs 1,13 lakh crore in early September 2020.

State Bank of India (SBI) has led the pack, sanctioning Rs 24,388 crore of loans and disbursing Rs 18,971 crore as of early September. Punjab National Bank (PNB) is second – it has sanctioned Rs 8867 crore up to September 22 to COVID-19 hit MSMEs, according to PNB officials.

Commenting on the impact of the policy over the past four months, the officials said, “The government enhancing the scope of units being covered under MSME and redefining it, will add to the positive impact on the sector. We have already started seeing the results with MSMEs proactively approaching us and we are expecting a good credit off-take.”

For Ahmedabad-based water treatment business Cleantech Water, the ECLGS loan has been beneficial in helping pay back its creditors.

“Money is the blood of all business and we have taken a loan under the Rs 3 lakh crore scheme. The funds benefited us as we used it to settle our debts and dues,” Deepesh Namdeo, Director at Cleantech Water, told SMBStory.

The ECLGS scheme allows MSMEs with up to Rs 25 crores of total borrowing to avail an additional 20 percent of the outstanding loan. This incremental lending is guaranteed by the Government of India.

Mathura-based textbook printing business G-tech Print Works is another beneficiary of the scheme. Founder Gaurav Agrawal says that in tough times like the ongoing pandemic, any such scheme is a “ray of hope” and is of “great importance for keeping morale up”.

“Yes, we have availed a loan as part of the ECLGS. Like us, many MSMEs are benefited directly by these monetary schemes. The schemes may not be adequate enough to fulfil everyone’s requirements, but they still provide good support,” he said.

The scheme’s structure only allows businesses with an existing loan to avail the incremental loan – something MSMEs are well-aware of.

Kolkata-based Naman Shah, who runs NowPurchase, a full-stack industrial procurement platform, argued such a loan is not really collateral-free. 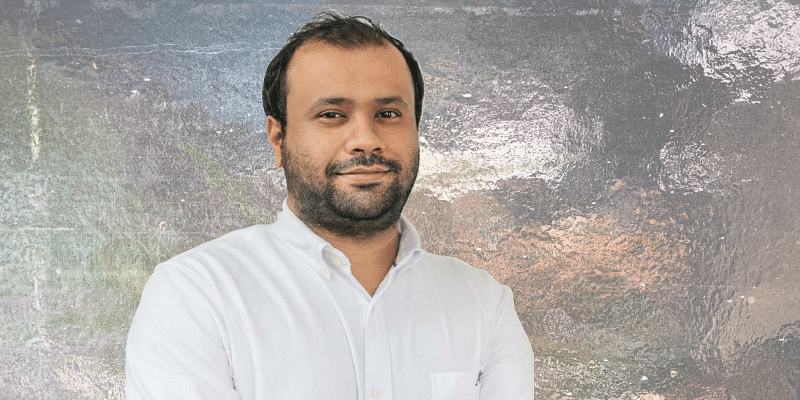 “The scheme is certainly a great step. But the incremental loan under ECGLS has to be backed by an initial loan which the MSME must have,” he said.

On account of the structure of the loan scheme, some MSMEs have been prudent in availing the funds.

Mukesh Mohan Gupta, President, Chamber of Indian MSMEs, told SMBStory, “Indian MSMEs have been using this emergency credit guarantee loan in a conservative manner. Not all MSMEs availed this because they knew it is a loan and they have to repay it.”

The lockdown period and initial freeze in production negatively impacted the financial health of MSMEs, causing many to slip into Non-Performing Assets (NPAs) and/or shut shop.

According to a report by Global Alliance for Mass Entrepreneurship (GAME) released in June, between 20 and 40 percent of MSMEs could permanently shut shop in the wake of the pandemic.

However, in September 2020, the government in a written reply to a question in the Rajya Sabha said it had no record of how many MSMEs shut down amid the pandemic.

To tackle the issue of rising NPAs among MSMEs, the Reserve Bank of India (RBI) in August gave a breather for MSMEs. It allowed further restructuring of loans for small businesses till March 1, 2021- an extension of an earlier scheme that was in place till December 31, 2020.

The RBI circular stated: “Asset classification of borrowers classified as standard may be retained as such, whereas the accounts which may have slipped into NPA category between March 2, 2020, and date of implementation may be upgraded as ‘standard asset’, as on the date of implementation of the restructuring plan.”

The government chose to provide Rs 20,000 crore subordinate debt to stressed MSMEs. In August, the fund was operationalised under the Credit Guarantee Scheme for Subordinate Debt.

Subordinated debt is debt which ranks after other debts if an MSME falls into liquidation or becomes bankrupt.

The scheme is valid for MSMEs which are SMA-2 accounts (Special Mention Accounts with principal or interest payment overdue between 61 and 90 days) or NPAs, and as on April 30, 2020, are eligible for restructuring as per RBI guidelines.

Mukesh Mohan Gupta welcomed the move and said, “The subordinate debt will be sanctioned and disbursed to MSME promoters, who in turn will invest this debt into their enterprises as their capital. This will help improve the financial ratios of the enterprise, thereby increasing the ability to borrow more and to grow fast.”

MSMEs also believe the fund can potentially boost recovery of small businesses amid the pandemic. However, they are adopting a wait-and-watch approach to see if the scheme is implemented well at ground level.

“No scheme can resolve every MSMEs’ individual problems and issues. We have to be self-reliant. However, this Rs 20,000 crore fund will help stressed units if it is executed well. The results are yet to come,” said Gaurav Agrawal.

For Aayush Madhogaria, director of business development at his family business Jagannath Iron Foundry, the reality of availing such schemes can be eye-opening.

“A lot of such announcements are made. But when you talk to banks at branch level, there are various conditions and ‘soft requests’ that come in the way,” said the Kolkata-based entrepreneur. 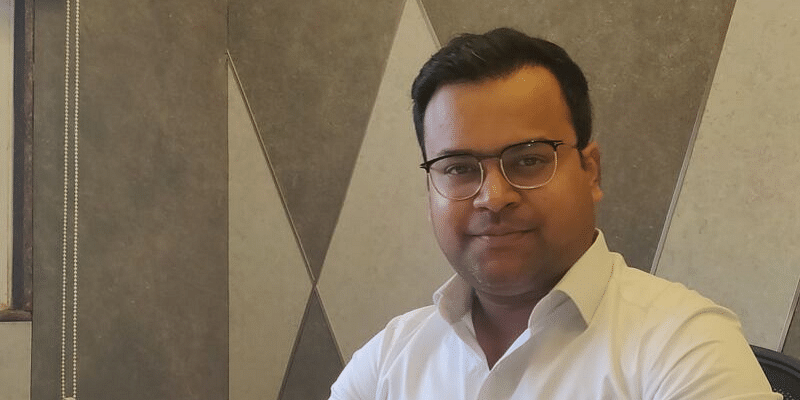 He added: “Cross-selling is a major issue MSMEs have to face. Some banks have created pressure on MSMEs to buy other products such as fixed deposits and mutual funds. Even though it is not stated explicitly, if you do not heed to such requests, your case under special schemes are not taken seriously or are not done on time.”

Rs 50,000 crore Fund of Funds: positive but wait and watch

MSMEs feel the same way about the move to provide Rs 50,000 crore equity support to stressed units through the FoF.

Deepesh of Cleantech Water and Gaurav of G-tech Print Works maintained the fund is a step in the right direction, but they are waiting to see whether bankers will have the same enthusiasm as the government did when it planned the scheme.

With Rs 10,000 crore of the fund coming from the government and the rest from venture capital (VC) and private equity (PE) firms, the FoF is expected to become operational soon.

The fund will target MSMEs with growth potential, viability, and aims to help them get listed on the stock market, even as they face shortage of equity.

While announcing it in May, Nirmala Sitharaman said the fund will be operated through a Mother Fund and a few daughter funds to enable MSMEs to expand in size and capacity, and would encourage them to list on the main board of stock exchanges.

The scheme is intended to help businesses which are in their nascent and initial stages, but have almost no prospects to raise funds through professional corporations or venture capitalists. The scheme proposes to buy up to 15 percent growth capital in high credit MSMEs.

For the MSME sector, which is the second largest employment generator in the country after agriculture, these government measures could make the difference in preventing a collapse of the sector and setting the stage for a revival of the Indian economy.

Want to make your startup journey smooth? YS Education brings a comprehensive Funding Course, where you also get a chance to pitch your business plan to top investors. Click here to know more.